Why You Should Drink Matcha Tea

Why You Should Drink Matcha Tea 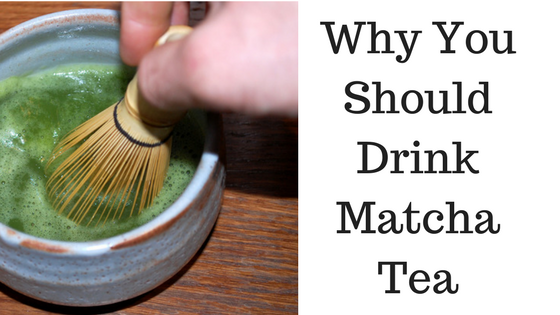 Matcha is just green tea, but the health benefits are 10-20 times more powerful.  This is due to the entire leaf being consumed in powder form, rather than just steeping the leaves.

Discovered around the 13th century, Chinese Zen Monks found that if they used the whole new leaf, harvested in April, that it was good for their ailments.  It also helped promote a deep calm, yet awake feeling, that led to better meditation practices.  Eric Gower, a Matcha specialist, likes to call Matcha tea “liquid meditation.”  Now, as good as that sounds…wait…there’s more!

It is the L-Theonine in the tea that leads to that calm, yet awake feeling.

Interestingly, I know some doctors who have helped people with their anxiety and sleep issues by suggesting they supplement with the amino acid, L-Theonine.

The tea grows in a shadier environment than regular green tea for a couple months a year.  (A good plant takes about 30 years to grow!)  This shady couple months causes the plant to pump out even more chlorophyll, amino acids, and polyphenols.  This increases it’s healing properties.

I find it fascinating that many studies are showing that drinking Matcha can cause apoptosis…or…increased death of cancer cells.  Some oncologists are even recommending that their patients drink a cup or two during their chemotherapy treatments.  This is due the amount of EGCG which is 20X the amount found in regular green tea.

So, how to tell a good Matcha from one that is low quality?  You want the brightest green that you can find.  Some have a yellowish tinge which means that they did not use the young leaves.  Good Matcha smells like raw cacao, unlike sub-par versions which will smell like grass or hay.  This is one time when buying organic may not be worth the money.  Matcha has been made the same way for centuries, with just fish meal based fertilizers.  They’ve found that chemicals compromise the taste.

The other good news about Matcha, is that it doesn’t seem to have mycotoxins and molds, unlike black tea which should be avoided by anyone who has bio-toxin illness, or is sensitive to mold.

But be careful here!  Those commercial Matcha drinks filled with fat and sugar from the local coffee shop will be counterproductive to the healing benefits.  So, just take the powder, some hot water and whisk it up.  Your body will thank you in many ways!