The Gluten Confusion – Fact or Fad?

The Gluten Confusion – Fact or Fad? 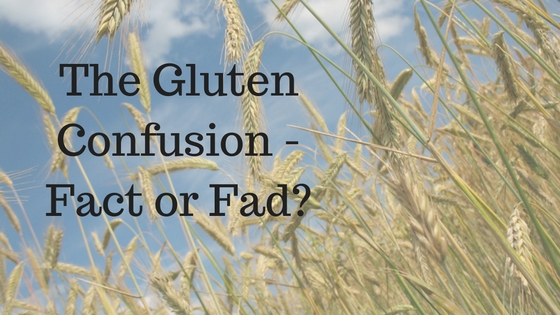 Why is the concern about gluten, which is mainly focused on wheat, suddenly an issue, when it’s been eaten in its wild form for around 23,000 years, and in its domesticated form for around 11,000 years?  Is it a fad, or is there substantial study behind the “Gluten Free” movement?

Studies show that up to 20 million Americans may have gluten sensitivity.  That’s in addition to 3 million with Celiac disease and around 500,000 with wheat allergies.

As Christians, it is especially troublesome when we know that God created it, and that scripture encourages the eating of it.  Then, downright inconceivable when we know that it is bread that actually becomes the body of Christ in the Eucharist.

First let’s start with the three different types of gluten sensitivity in the debate.

One is just a plain Wheat Allergy.  It’s conceivable for any bio-individual human to be allergic to anything.  This is a relatively small population however.

Celiac Disease, a genetically traced autoimmune response that happens when gliadin (which is the protein in gluten) enters the intestines and the immune system attacks the walls of the intestines in a case of mistaken identity.  The villi, which are like shag carpeting, and line the walls of the intestines, atrophy, which leads to permeability.  Vomiting, diarrhea, constipation, and diminished growth in children are symptoms.  It is interesting to note that just 30 years ago, the validity of Celiac was a source of confusion, and not accepted by the medical community, and that Celiac Disease has now increased four-fold in the last 40 years.

Now, the controversy comes under the name of Non-Celiac Gluten Sensitivity which is when similar things happen, for reasons that have been studied and highly debated, and lead to many issues like rheumatoid arthritis, fibromyalgia, thyroid disorders, gut disturbances, acid reflux, ADHD… the list goes on.  It stems from an auto-immune system that has become overly sensitive for one reason or another.

Many studies and many theories…

1.       It’s not the gluten; it’s the gliadin, which is the protein in gluten.  It’s in all seeds of grasses, including rye and barley.  Dr. William Davis says that gliadin binds to opiate receptors in the brain, and stimulates appetite.  It also makes paranoid schizophrenia worse, bipolar illness, etc.  And he has noticed that people who truly go 100% gluten free, including hidden glutens in our food and skin care products, go through an opiate withdrawal syndrome that can be one to two weeks long.

2.      It’s the glysophate, otherwise known as Roundup, manufactured by Monsanto.  It is absorbed into the wheat, which enters our bodies…similar to the case against GMOs.  Since wheat is in so much of what we eat, mostly hidden, we are getting more of this toxic chemical into our bodies than we know.  Interesting to note, is that we are also getting far more gluten in our bodies than man has ever had in the past.  The chemistry labs responsible for the ingredient lists on processed food, realized a long time ago, that wheat and sugar combined create an addictive response in people.  More addictive processed food equals more sales and higher profits.

3.      It’s the hybridization, which is quite different from genetic modification.  Hybridization is the cross pollination of two like-plants to create a variety that withstands local farmer environment…their soil, weather, and predatory insects.  Genetically modified plants cross unlike plants, bacteria and other substances that are toxic, to create a plant that is disease and pest resistant.  Currently wheat is all non-GMO, however, chemical companies keep trying to get it approved.  The fact is, due to hybridization, the wheat we eat today is not the same as biblical wheat.  In fact, it’s been found that hybridization has created more gluten/gliadin than ever found in wheat in the past.  In response to this theory, many people are making sure that their wheat comes from heirloom strains, like Einkorn.  They source it from reputable companies and even mill their own flour. They are convinced that their health is better for it, as they don’t have the symptoms they experience after eating commercial wheat.

4.      It’s wheat in general.  Dr. Alessio Fasano, chief of pediatric gastroenterology and nutrition at Mass General at Harvard states that all wheat is indigestible by humans.  Our enzymes don’t recognize gluten, and the undigested peptides can be harmful.  He also states that wheat inhibits nutrient absorption.  He is also a supporter of the link between gluten and mental illness.  In clinic, Dr. Fasano has seen the effects of gluten take shape in adults by way of depression, short term memory loss and mood swings.  The Journal of Attention Disorders, March 2006, states “All children clinically diagnosed with ADHD or their parents, report a significant improvement in their behavior and functioning after 6 months of a gluten free diet.”

5.      Dr Tom O’Bryan explains very well how the villi inside the intestinal wall atrophy with the introduction of gluten when it causes an autoimmune response.  It starts out looking like shag carpet and turns into Berber.  That’s what happens with celiac disease, and they see it happening with a non-celiac condition now.  The good news is that the intestinal wall contains the fastest growing cells in the body.  It renews every 3-5 days.  It’s when it can’t renew any longer, for one reason or another that we start having issues like gut permeability, AKA Leaky Gut.  Reasons can include environment, toxins, stress, how many antibiotics you’ve had in your life, etc.

Some doctors use only blood tests to determine non-Celiac Gluten Sensitivity, and some say that only stool tests are accurate.  Unfortunately, there is no standard test yet.  And, most doctors don’t take it seriously at this point…similar to Celiac Disease 30 years ago.

I’m in favor of extensive ongoing studies, but in the meantime, one of the things I believe, is that we need to take the focus off of wheat as a bad guy, and put the focus on ourselves and why our bodies are reacting.  What is the underlying cause?  What lifestyle habits need to be changed that might be triggering a heightened sensitivity in some people?

As a health coach, I have personally known people, including my own clients, who have benefitted from going gluten free.  I don’t know why, and I don’t pretend to be able to scientifically explain it.  One family I know went gluten free due to thyroid issues they were all experiencing.  When the thyroid nodules that they had been keeping an eye on for years, were tested a year later, they had either all shrunk, or disappeared completely.   This makes sense, since studies show that the molecular structure of gliadin closely resembles the thyroid gland.  When it gets through the intestinal wall, where it doesn’t belong, the body goes into high alert and the immune system starts attacking…the gliadin and anything that looks like it.

Another person with Rheumatoid Arthritis went off, and his pain went away.  He started taking his lack of pain for granted, and started eating bagels again.  You guessed it, his pain came back.  It has been suggested in studies that gluten causes inflammation of the joints, the brain, the respiratory tract…etc…so this makes sense.

When I open this up, beyond my own circle, and my own practice, to my health coach colleagues, I would say conservatively that tens of thousands of people have had the same results. Does that mean “everybody?”  No.  We are all bio individual and we will never know completely why one thing works for someone and not for another.  But, my take is…if you are working with a health coach or functional med doctor, or another medical professional who has insight into gluten…and they suggest you try going off.  It isn’t going to hurt you, it can only help.

If you are considering going gluten free, you need to be 100% all in. Know the different names for gluten, and read labels. A little soy sauce on your sushi?  You just had gluten.  A licorice rope treat?  Gluten.  Most lotions and cosmetics?  Gluten.  Many supplements and pharmaceuticals have gluten in them.  It takes 6 months to clear gluten from the body, however, some people feel results starting in as little as 2 weeks.

So we go back to my mantra on everything that goes into or onto your body….READ LABELS!  Know what is in your water!  Eat clean and real food. Take your health seriously, and be respectful of the body that God gave you.