Know the Difference Between the Flu and Sepsis

Know the Difference Between the Flu and Sepsis 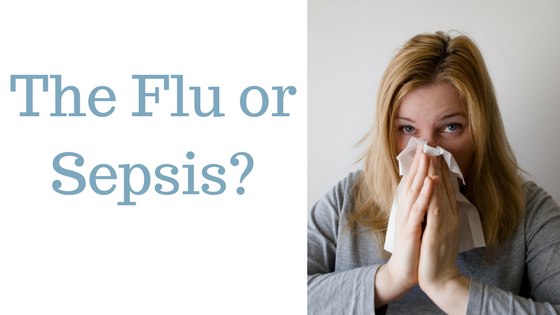 As winter drags on in my area, the one thing that has not taken a “snow day” is the flu!  This year has been a challenging one with many schools around the United States closing down for a week or so to disinfect and keep the virus from spreading.  As the flu can be deadly in itself, this is not usually the case.  Deaths from the flu are usually the result of secondary infections, not the flu virus itself.  One very dangerous infection is sepsis.  Sepsis kills over 250,000 people each year in the United States alone.  Symptoms of sepsis often mimic the flu and this can be deadly. We should all be alert to the difference between the flu and sepsis, as the lives of those we love may depend on this knowledge.

The CDC has released a brochure titled “Get Ahead of Sepsis”.  This report states that early recognition and prompt treatment of sepsis will save lives.

So how do the symptoms of sepsis and the flu compare?

The flu is a highly contagious virus that comes on suddenly. Symptoms can include:

Recovery is usually within one week to two weeks.

Sepsis is the body’s extreme reaction to an infection and can rapidly lead to tissue damage, organ failure and death.  Symptoms of sepsis include:

Should a few or all of these symptoms be present, seek immediate medical attention to rule out sepsis!

So how can we keep ourselves and loved ones safe?  There are a few strategies that can reduce your chances of coming down with influenza or sepsis.  Most importantly, keep your immune system strong!  A tablespoon of apple cider vinegar in a glass of water every morning is a good tonic for a healthy immune system.  Optimizing vitamin D levels by supplementation or a walk in the sunshine daily can be an effective strategy as well, and any infection should be closely monitored.  If an infection is not improving or getting worse seek medical attention.

If sepsis is diagnosed, the use of a sepsis treatment protocol has been shown to reduce sepsis mortality five-fold.  Developed by Dr. Paul Marik, a critical care doctor at Sentara Norfolk General Hospital in East Virginia, the protocol involves intravenous (IV) vitamin C with  hydrocortisone and thiamine (Vit B1).

Armed with this knowledge, my prayer for you is that you and your loved ones remain strong and healthy throughout this season as we look forward to the healing warmth of spring.