Time to Straighten What is Crooked

Time to Straighten What is Crooked 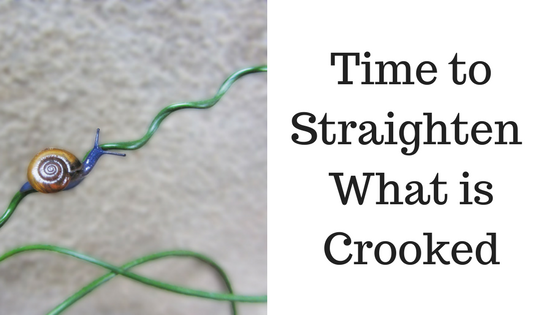 Today is the Sunday before the Feast of Theophany or Epiphany, when we will celebrate Christ’s baptism in the river Jordan and the revelation that He is truly the Son of God.  His divinity is manifest, is shown openly, when—at His baptism– the voice of the Father declares “You are my beloved Son” and the Holy Spirit descends upon Him in the form of a dove.  Epiphany shows us that Jesus Christ is not merely a great religious teacher or moral example.  He is truly God—a member of the Holy Trinity– and His salvation permeates His entire creation, including the water of the river Jordan.  Through His and our baptism, we become participants in the holy mystery of salvation.

Think for a moment how stunning these statements about Jesus Christ as God would be to those who knew Him before He began His public ministry.  St. Luke records that the Theotokos and St. Joseph were shocked to find the12-year-old Savior discussing the Law in the Temple in Jerusalem with the elders.  The witness of the angelic choirs, the visit of the wise men, and all the wonder of the events surrounding His birth were apparently forgotten or unknown by the disciples and the religious and political leaders of the day.  The gospels of St. Matthew and St. Luke record these events, but do not tell us that they figured prominently during His earthly ministry.

Moreover, no one expected a Messiah who was both God and man.  The word “messiah” means “anointed one,” and most Jews were looking for a leader who would deliver them from Roman oppression and lead Israel to political power and independence.  Christ’s own disciples thought of Him in those terms until after His resurrection.  Even those closest to the Lord had great difficulty accepting that He was not an earthly king, the kind of Messiah they had grown up expecting.  How difficult it was for anyone to accept that Jesus Christ is truly the Son of God, the incarnate second Person of the Holy Trinity, the divine Word Who spoke the universe into existence.

Perhaps that is part of the reason that God sent a prophet to prepare the way, to begin opening the hearts and minds of the people for a coming Messiah Who did not fit their preconceived notions.  Of course, few people would be comfortable around St. John the Baptist and Forerunner.  He was a strict ascetic, living in the desert, eating bugs and honey, and wearing camel skin.  Like many of the Old Testament prophets before Him, St. John was outrageously bold.  In addition to his shocking appearance and lifestyle, his message was severe to the point of being insulting.  He proclaimed God’s truth and did not care who might be offended.  Instead of gently welcoming the Pharisees and Sadducees into his movement, St. John mocked them as a brood of vipers—a bunch of slimy snakes.  He told the rich to share with the poor, soldiers to stop abusing their authority, and tax collectors to stop stealing from the people.  He went beyond offending those powerful groups by criticizing the immorality of the royal family and lost his head as a result.

God began to shake up Israel with St. John the Baptist, the Forerunner of our Lord.  He began to open their eyes to a Messiah Whom they did not expect.  Gentle words from a respectable rabbi would not cut it; everyone had seen and heard that before.  They needed a call to repentance from a wild and holy man who was absolutely fearless in calling the people to repent, to change the direction they were going in relation to God and neighbor.  They were to make straight whatever crookedness there was in their lives.  They were to stop violating God’s requirements for how to live.  No one was to say, “But I am a child of Abraham or a religious leader or a well-respected person, so repentance is not for me.”  He called everyone to greater holiness, to serving God more faithfully than they had done before.

As we prepare for the Feast of Theophany, St. John’s message should ring loudly in our ears today, right here and now.  For even more than the Jews of old, we must bring our lives in line with God’s salvation in Jesus Christ because we have already received the fulfillment of the promise, the fullness of the blessing.  Having celebrated His birth as Orthodox Christians, we already know that our Savior is the Son of God.  The Holy Spirit dwells in our hearts and we are members of the Christ’s own Body, the Church.  Nonetheless, every single one of us has much room to grow in living according to the great truth that we have received, for our lives have not yet become perfect epiphanies of what Christ’s salvation means for human beings.

It would be different if the Epiphany of Jesus Christ as the Son of God were merely an idea or concept to be grasped as an abstract truth, like a mathematical equation.  Perhaps then we could be satisfied with giving the correct doctrinal answer.  The spiritual life is not like that, however, because this feast calls us to be in right relationship with the One who unites humanity and divinity in Himself.    In order for our Lord’s epiphany to occur in us, every dimension of who we are as we live and breathe in this world must be transformed by His divine glory.  His life must become ours.  Like an iron left in the fire, we are to participate in Him fully, sharing in a communion ultimately beyond words and radiating the glory of His divine salvation.

The hard truth is that repentance is essential for opening ourselves to the life of Christ.   No, this calling is not to a self-righteous legalism that allegedly earns salvation or somehow impresses God.  That would be impossible. We must do our part, however, cooperating with the great mercy of Christ, actively receiving and responding to Him in ways that make straight what is crooked in our lives.  Like those who first heard the Forerunner, we have  become too comfortable with life on our own terms, perhaps thinking that our religious, ethnic, or national heritage lets us off the hook as God’s favorites, as those who are respectable and decent and therefore do not have to worry about repentance.   “At least we are better than those groups we love to hate,” the Jews thought of the Gentiles and we might think of whomever we do not like or whom we fear for whatever reason.  St. John would have no patience with such foolishness, of course.  As he did to the Jews of the first century, he would tell us to wake up, abandon our excuses, and stop trying to turn God into an idol that pats us on the back and serves our agendas.  He would call us, instead, to become true icons of our Lord, to participate as fully as we can in the divine healing and transformation of Jesus Christ.  Those who have died to sin and been raised to new life in Him, those who have put on Christ in baptism, must live in a manner that manifests the holy union of God and humanity that our Savior embodies.

So let us prepare for the great feast of Christ’s baptism by straightening the crooked areas of our lives.  Instead of finding ways to ignore the Forerunner, let us take his sobering message to heart.  For the Messiah is born and is on His way to the Jordan where His divinity will be made clear.  Will we have the eyes to see His glory?  Will we be ready for Him?  There is only one way to prepare and that is to repent, to turn away from everything that hinders our full participation in the divine glory that He brings to all who bear His image and likeness and to the entire creation. That is what His baptism makes possible for us, but we must prepare by repentance in order to share personally in this great mystery of our salvation.