What Most People Don’t Know About Bats

What Most People Don’t Know About Bats 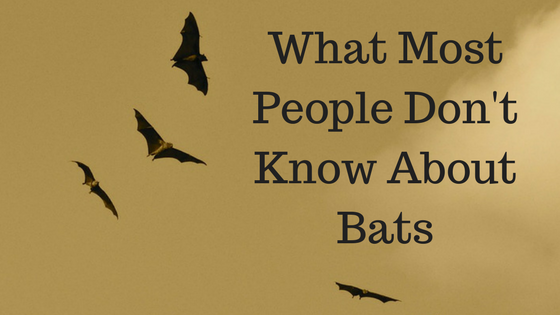 Really Cynthia?  You’re starting the year off with a post on bats?  Not wishing our old calendar friends a Blessed Nativity, or even mentioning Theophany?  I do of course, and pray that everyone’s nativity season has been blessed, along with your observance of the Baptism of our Lord.

I just had to get to the bat topic though, as it is near and dear to me lately.  Plus, I’m all about health and saving lives…

Quick, what do you do if you wake up in the middle of the night to find a bat in your bedroom?  Let’s say, it’s 3am, and you just woke to a fluttering sound going over your head.  This happened to me around the first week of October, and my first thought was…get it out of the house! Curiously enough, my first thought wasn’t to kill it.  I know this may offend some people, but this is my first thought when I see a spider.  After all, spiders belong outside, and if they come into my house, they are obviously not in their right mind and should be exterminated.  However, that didn’t cross my mind with the bat.  Interesting.

After jumping out of bed and turning on the light, I noticed that as it was was flying around the house frantically, it seem to be going into the chapel more often than not.  I’m thinking, “either this is a very pious bat, or it is flying into the chapel because it’s dark.”  I decided that a pious bat was probably fairly rare, and if it was a rare one, it was probably praying that it would be set free to go back to his family.  I turned on all the lights, opened the front door, and eventually it flew out into the night.

A couple days later I noticed two scabs on my foot. “Isn’t that interesting?” I thought to myself, first a bat in my bedroom, and now, coincidentally, something that looks like a bat bite on my foot.  And that’s how I lived for almost three months.  In denial.  I know…you thought I was smart up until now.  In my defense, a few years ago I was staying with a friend’s family in the Ugandan upcountry. When he asked me how I slept, I mentioned that the bats flying over my head all night were a bit disconcerting.  He laughed and said that he had forgotten that people in the US are afraid of bats.  In Africa, they are a good sign, since they keep the mosquito population down.  So, I took comfort with that knowledge.

Last month I interviewed Joel Miller, author of Lifted by Angels, for My Beautiful Advent.  It was wonderful to talk to him, and we talked quite a bit about guardian angels. Well, I finally listened to mine. A couple weeks before the Nativity, I noticed the red scars on my foot.  All of a sudden it became crystal clear that this was not a coincidence, so I did what any sane person would do and I Googled “bat bites,” clicked on “images,” and at least 100 came up that looked exactly like the bites on my foot.  Two puncture wounds exactly 1 cm apart.  Note to self:  Happy African bats doing their thing in their nest, and a wayward bat finding it’s way into your home by mistake is NOT the same thing!

Come to find out, if you are awakened at night to find a bat in your room, you have to assume that you have been bitten.  You must capture the bat dead or alive, and both of you go to the emergency room immediately.

If the bat is rabid, the symptoms could start in two days, and death is imminent.  But wait there’s more, since I’m still alive, we may assume that the bat did not have rabies. Not necessarily!  Symptoms can show up even two years later.  Once the symptoms start, there is no way to stop them, and the person dies.  Is this news to you?  It was to me!  I finally let my doctor know and she said that I needed to go directly to the ER.  Getting seven rabies shots over the course of two weeks during the Nativity season was not my idea of peace on earth.

Not exactly the type of blog post you expected from me to kick off the year, right?  However, it has a happy ending for the bat.  I did not kill it, it probably doesn’t even have rabies, and it has been at home with the family for the holidays.

On top of that, although I may be getting rabies shots for nothing, after talking to Joel Miller, I did learn that you should never ignore your guardian angel when he is trying to tell you something…and I will try to listen in a more timely manner this year!